A new poll by Emerson College in Massachusetts finds the Kansas governor’s race is a statistical tie with five weeks to go until the general election. 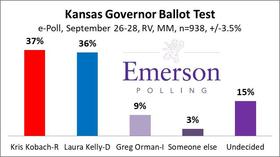 Independent candidate Greg Orman received support from 9 percent of voters. About 15 percent of those surveyed are still undecided.

The poll indicates President Donald Trump is popular in Kansas with a 55 percent approval and 45 percent disapproval rating.

The results also show voters would re-elect Republican Ron Estes to represent the 4th District in Congress over Democrat challenger James Thompson. Estes had 50 percent of the vote to Thompson’s 26 percent. About 20 percent of voters questioned were still undecided in this race.

The poll also studied other congressional elections in Kansas:

Kansas Governor Candidates Each Have A Plan To Fix The Economy. But Will One Work?

The Kansas economy has been sluggish the past few years, but the candidates running for governor each have a plan to jumpstart things.

Will any of them actually work?

The top contenders running for governor say Kansas should not follow Colorado’s lead and legalize recreational marijuana, but they differ on medical marijuana.

(This story has been updated.)

Gov. Jeff Colyer lost a nail-biter Republican primary for governor to Secretary of Kris Kobach and quickly backed the man who beat him.

At least one key member of his campaign, however, moved on Monday to jump ship from the party’s nominee.

Independent candidate for Kansas governor Greg Orman will stay on the ballot after state officials rejected a challenge to his candidacy Thursday.

Will Lawrence, a staffer for the state Senate’s top Democrat, had questioned thousands of the signatures Orman used to secure a spot in the race, saying they weren’t collected properly or notarized correctly.